[My thoughts on Terror in Resonance]

Terror in Resonance was an easy show to watch but it’s proving to be a difficult one to write about. Difficult, because there’s quite a lot packed into eleven episodes. I wouldn’t say that all eleven episodes were fantastic but Terror did get more of them right than wrong.

The first episode of Terror had me hooked, with the next couple of episodes reeling me further in.  The premise was exciting, the characters were intriguing and the animation was fluid and beautiful. I’ve seen anime where the protagonist dabbles with terrorism as a means to an end (Code Geass and in a subtle way, Death Note), but it was never completely packaged as terrorism. Watching the first episode of Terror gave me a sense of déjà vu but it also felt like unchartered territory. The boys, their mysterious agenda and their methods were altogether fascinating.

The anime also toyed with the concept of heroes playing villains or villains playing heroes (a bit of both, actually). It wouldn’t have worked without good characterisation and I thought that this was another thing that Terror nailed with the protagonists. Nine and Twelve, the masterminds behind the acts of terrorism plaguing Tokyo, are very compelling characters. It’s hard to place them, especially at the beginning, without knowing their motives.

Their personalities seem to be polar opposites at first glance. Twelve is the one wearing the sunny smile, seeming warm and friendly. Nine on the other hand, is cold and aloof, wholly concerned with the success of their schemes. It becomes patent quite quickly that their personalities are not so divergent. For all his friendliness, Twelve isn’t very considerate and can be quite selfish. The story slipped this in quite nicely, showing him prioritising his immediate interests and wants, disregarding Nine’s words of caution. There’s something disquieting about the way he interacts with characters other than Nine. It’s like he’s trying to see what it’s like to live, experimenting with his feelings and getting carried away with the moments. 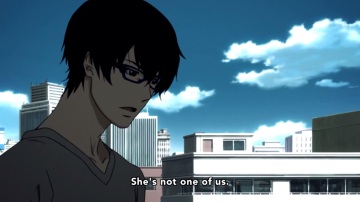 Nine on the other hand, in spite of his icy demeanour, really cares about everything. His meticulous planning and iron control are the factors that minimise the casualties in the disasters that boys orchestrate. Nine never wavers from his goal and that’s actually because he cares – even about the dead. The two of them are different from anything that their adversaries (the Japanese authorities) expect, walking a fine line between heroism and villainy. It’s really well done in Terror.

The disconnection between this expectation and reality set up the first couple of episodes to be quite fun – Nine and Twelve were always a few steps ahead of those who were chasing them. One got pretty close, the detective – Shibazaki, but he was often delayed by red tapes (unavoidable in any organisation) and the stupidity of his superiors. Shibazaki is an integral character here because he was the one that noticed that the boys are not traditional terrorists. His sharp intellect, matched with his sense of empathy, helps to provide some much needed insight into the boys’ actions. He is there to dig deep and discover the true villains in the story. I would have preferred it if the story had continued like that, with Shibazaki finally catching up towards the end.

What actually happened, needless to say, is the standard method of dealing with geniuses – to add another one into the picture. I understand the need to level out the playing field, but it’s been done again and again. In this case, Five, the balancing act, also doesn’t have the charisma that could endear her to the viewers. It’s obvious from the moment she steps off the plane that she’s not there to be the hero. It’s another case of reality being far removed from expectations (again, that of the Japanese authorities because her nature is quite obvious to the audience).

With Five entering the story, things really start leaning towards drama.  Watching her effortlessly pre-empt the boys’ every move while painting her nails was irritating. Then there’s the amount of damage that she gets away with, which does not make any sense to me at all. Anyway, I guess what I’m trying to say is that the story was much better before and after the balancing act.

While the latter half of the show wasn’t as good as the first couple of episodes (courtesy of Five), the last episode made up for all that. Episode eleven made me feel completely uneasy. The resolution seemed to have come too soon and it felt like I was just waiting for something horrible to happen, with the boys finally acting like normal teenagers. It was a different type of suspense but still fantastic.

And just like that, Terror in resonance managed to keep me on the edge of my seat for almost the entire eleven episodes, even with the annoying bits in the middle. I wouldn’t call it a masterpiece and it didn’t leave much of an impression but it was eleven episodes of exciting and entertaining storytelling. Like I said, it did get more things right than wrong.

If you have watched Terror and have any thoughts to share, feel free to leave them here…

4 thoughts on “Terror in Resonance: Heroes and Villains”