I have a bunch of keys (house, room, drawers, my entire life basically) hanging on a Saiyuki keychain, scratched and yellowed from over a decade of use. I purchased it as a teenager, back when I was quite interested in watching four guys travel on their dragon-car to save the world (that could be a synopsis, by the way). 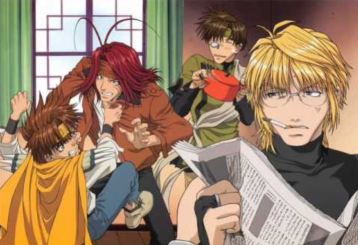 The first instalment of Saiyuki, I watched on some random channel on cable TV and liked it enough that I watched the sequels as well. It’s not a bad story actually, and that’s a given, since it’s based on a timeless pillar in Chinese literature. This adaptation brings together four hackneyed personalities – surly, playful, flirtatious and, erm… nice – who have to travel to the west to investigate the revival of a powerful demon, which is causing other demons in the country to go berserk. They gain quite a reputation along the way, as they fend off the minion demons as well as ghosts from their pasts.

There were two things that kept me invested in the story. The first was their mission – see, I was – still am – genuinely curious about how our heroes are going to fix the problem in the West. The second was the flashback revealing the characters’ past lives. It was woven into the narrative quite deftly in Gensomaden Saiyuki, and we had the two stories unfolding together. We learn that our heroes had befriended each other in “heaven”, in their previous incarnations and this past seemed a lot more fascinating compared to the present, simply because they were a lot more vulnerable, back in “Heaven”. Paradise turns out to be rotten place, rife with corruption and at some point, tragedy strikes tearing the friends apart and killing them in the process. It takes five hundred years for our heroes to meet again, with no memory of their shared past.

One of the questions that I always wanted answered was the exact nature of the tragedy that befell them and fortunately, a brief instalment – Saiyuki Gaiden –  was released some years ago to answer that question. This history is also included in the latest season of Saiyuki, which was released last year. What’s less fortunate, was how rushed the entire flashback felt. While it had its share of sad moments, the actual tragedy turned out to be quite underwhelming and far less intriguing than I what I imagined it might be. In no way was it worth the wait.

So now, that that’s out of the picture, all that remains in Saiyuki is the guys making good on their mission to storm the west. Sadly, that’s not going to happen anytime soon. It’s one of those stories that’s clearly about the journey and not the destination, although I think it’s about time that they got to their destination. I suppose all is not lost, because in the latest instalment, the gang finally set foot in the much anticipated West. Now we just need to wait another decade or so for them to take the next step.

I’ll probably still watch whatever else they release, simply because I’ve invested quite some time into this series, but I’m not going to wait for it. If there’s one thing that I really understood from the latest season, it’s that nostalgia isn’t always enough. Whatever I used to find in this show, I don’t anymore, not even in the earlier seasons which I tried re-watching. 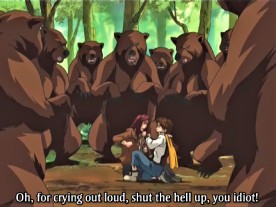 There was a time when I could laugh myself to tears watching this show and now I can’t. Watching the characters hurl insults at each other used to crack me up but I can barely refrain from skipping through these scenes now. I could also ignore the painfully pathetic animation quality and enjoy the jerky motions and awkward poses that encompassed the fight sequences. Unfortunately, the animation hasn’t healed in the sequels and I can’t revert to enjoying it after seeing shows with far superior quality. The younger me also probably didn’t question how the characters pulled weapons out of thin air or where the monk was stashing his infinite supply of bullets. Anyway, the point is, I was easier to please when I was younger.

But these are minor issues compared the major ones plaguing the story. Again, I didn’t notice them as a teenager but they’re glaringly obvious to me now. The largest problem is that the worldbuilding is inconsistent. They have a dragon that transforms into a car. They have magic mirrors that allows for communication with “gods”. They also have credit cards and science labs and scientists. But everyone else in the world seems to be living in pre-industrial times. I’ve never encountered a story where technology fluctuates as much as it does in Saiyuki. Also, couldn’t the almighty powers that gave them their mission also find them an easier route to the West? A plane perhaps? Or a magic portal?

Then there’s the issue of the demons going berserk. As if to prove to us that the demons really are turning mad, once in a while, Saiyuki squeezes in an episode showing some sorry demon struggling to retain his/ her mind. Understandably, there is conflict between humans and demons with one side becoming violent. What I don’t understand is why the story insists that the demons have gone berserk because they clearly haven’t. They’re not mindless killing machines and they don’t behave like lunatics. They are actually very systematic and organised in their aggression towards humans. There’s teamwork, communication and even a good measure of planning. It appears that they’ve switched sides but that’s still far cry from insanity.

I think the overall problem with Saiyuki is that for a story centred on a story that has been around for a while, there hasn’t been a lot of thought put into it and it is patent from the poorly constructed world and the poorly constructed conflicts. It’s a simple story that has dragged itself out for too long and I can no longer appreciate the journey.

Wow, this has turned out to be quite a rant hasn’t it? I suppose it stems from my current disappointment with something that held much promise for me in my youth. As we age, I guess we become more critical. I still love a good story, and I still hope this one will eventually end on a good note. And for the record, I don’t think the journey is the reward; the reward is the reward.