[My thoughts on Cowboy Bebop, the anime that needs no introduction. Warning for spoilers.]

Cowboy Bebop is a masterfully made series, profound, poignant and something like perfection too. I didn’t believe that it could be this good but once I watched it, it was pretty clear to me that it’s in a league of its own.

This space opera is a lot of things and it doesn’t have many boundaries. It explores diverse concepts and subtly puts forth ideas about people and the way we choose to live. While it goes without saying that Cowboy Bebop draws some influence from the western, it is also inspired by science fiction, crime and even the supernatural. The themes are never static and the mood and tone between episodes swing like a pendulum during an earthquake – some are loaded with danger and suspense and others are side-splitting fun. Perhaps Cowboy Bebop’s greatest achievement is that it took its multifarious themes, genres and ideas and created harmony out of them. The episodes flow beautifully and cohesively in spite of the jarring differences in what they’re about.

Notwithstanding the largely episodic design of the show, Cowboy Bebop did have an overarching storyline. There were brief flashbacks that reared up from time to time, dropping clues about the characters’ backstories and also connected the events in the past to the present. Cowboy Bebop didn’t handhold its audience and didn’t get carried away, trying to explain every single event that happened in the past but it doesn’t confuse the audience or leave us in the dark either. The balance in the storytelling is one of the things that I value in this story.

It’s not possible to rave about Cowboy Bebop without bringing up the soundtracks. I am not a musically inclined person – I know close to nothing about musical genres or sub-cultures and I have no deep appreciation for the nitty gritty technical details of music in its various forms. Yet, when I watched this show, I remember thinking that it sounded perfect. In every episode, the music nailed the emotions involved without fail. I wish there are more shows out there that sound this good. 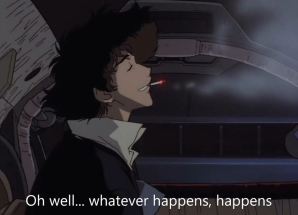 And then there’s Spike. Spike is one of the most complex characters I have ever come across and he’s fascinating because his complexity isn’t overly contrived or shoved in the audience’s face. It was on hindsight that I realised that I don’t understand him, although he is a likeable character. He doesn’t easily reveal how he feels and as the very first episode demonstrates, even when he does say something about himself, we never know if he is telling the truth or lying. Sometimes I think he’s suicidal, the way he leaps into danger without caring about the consequences. Then at other times, he clearly fights to live. The enigma is what makes him exciting to watch.  What I like about Spike though, is that he is a good person; guns and bombs aside, Spike cares for the people around him (even if he says he doesn’t). I’m also a big fan of the voice acting here. Koichi Yamadera has done a perfect job with Spike Spiegel’s voice, from the hilarious outbursts to the carefully concealed grief. The character was brilliantly played, a testament to the actor’s talent.

The feel of Cowboy Bebop is also different from anything else I’ve watched. It had a very nostalgic quality to it, for a show that’s set in a futuristic world. It’s a combination of the animation, the music and the character design. For me personally, it also has to do with some of the minute details thrown into the show. For instance, the various languages that they use to broadcast announcements at the ‘gates’ – not just Japanese but Chinese and Bahasa Melayu or Indonesian (really sorry, I can’t tell the difference) – sounds very much like what I hear every day in my country. And then there was that episode where Tiger Balm made a brief entry and that used to be my mother’s go-to medication for pain. There’s also the VHS which is as old school as it gets. All in all, there were sufficient details that made me cast my mind back to my childhood days.

Of course, not all the details worked. There were a few odd moments and what stood out to me, particularly, was Faye’s “hometown” – Singapore. Her family seems to have had an obsession with the Merlion, but having lived here all my life, I can confidently state that this is a rare condition; we don’t usually decorate our doorstep with this tourist attraction. Still, it’s a minor slip and it doesn’t affect the quality of the story in any way. Besides, to anyone who hasn’t grown up here, it probably wouldn’t even register.

It’s been close to two decades since they made Cowboy Bebop, but I haven’t seen anything like it since. It’s not my favourite anime but I will readily admit that nothing comes as close to perfection as Cowboy Bebop. This was a beautiful series, a good mix of many things and the culmination of art in its various forms. I love the subtleties in the storytelling and the ambiguities in the conclusion. I love everything about it.

You can find more of my reviews at: ennadune.wordpress.com